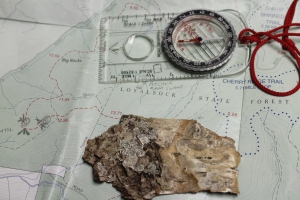 Ever since January 2013, I’ve been dreaming of returning to Loyalsock State Forest, the climbing bug eating at my brain.

During the winter in Pennsylvania, our oaks and birch and mountain laurel are leafless and you can see a couple hundred yards into the forest, unlike in summer when thick ferns, laurel, thorns and other brush drown your vision in a sea of leafy green fog.

You can see rock ledges and crags on the sides of mountains from miles away on the interstate in winter.

In July, I returned to Loyalsock — specifically the Old Loggers Path on Sullivan Mountain near Ralston, Pa. — and lugged my 10.2 mm climbing rope and webbing with me on an overnight hike generating one pathetic climb.

Last month, I again returned to Sullivan Mountain with my friend Josh Stadler to climb some of the larger cliffs we saw or learned of in the last eight months. The trip did not disappoint.

Parking at Yellow Dog Road’s intersection with Ellenton Ridge Road at the top, we hiked west along the Ellenton Grade past the pitcher plant swamp that marks the headwaters of Doe Run and on past the gas line clearing. At the top of the ridge, we turned north following the western side of the ridge to the first set of sandstone rock cliffs where we did some rappelling and climbing on a 25-foot face.

The wall is a good beginner’s face, but I would steer clear of the western side as the rock is crumbling away from the overhanging roof above. It’s obviously unstable and dangerous.

Looking over satellite pictures of the area, it’s clear now that we had not even approached the main climbing area further to the northwest. Another time.

After lunch, we worked our way back to the Ellenton Grade — significant because gas-drilling company Anadarko said in its 2012 proposal that much of its activity would be focused along the former logging grade.

Following the grade to its intersection with the Old Loggers Path, we proceeded south on OLP to the western cliff faces below the mountain’s saddle. If you traverse the saddle and head southwest, you’re walking out onto Sullivan Mountain’s finger jutting into the valley.

The hike up the mountain is exhausting, especially lugging that climbing rope, webbing, a full complement of carabiners, 3 liters of water (I drink a lot of water), snacks, the regular survival essentials, and of course camera gear to document the trip.

And the whole time, you’re sliding on ice or your feet punch through the crusty base layer of snow as the sun weakens it, slowing you and occasionally cutting into your ankles as they turn on the rocks underneath. You walk three steps and fall back one. Progress crawls along.

Then the hill angle softens a bit, and new cliffs appear from behind the brush.

It’s intriguing to stand there and see about a dozen windmills towering on the mountains beyond McIntyre Wild Area.

Whether its natural gas or wind power, modern industrial complexes are encroaching on the northern Pennsylvania forests and its hard to know where your soul should be.

But in front of you is a 35-foot cliff, the sandstone pockmarked by the corrosive force of water. So you slip into your harness, anchor your rope and begin an abseil of the ice sheet in the slot between the cliffs to explore it further. All the while, you’re descending into what looks like a probable bear den. Please don’t be a mother with cubs and a taste for skinny guys in funny helmets.

The ice was so bad in the slot, I had to Prusik up the rope for safety. In the summer, you wouldn’t even need a rope in the cliff slot.

The day waned and it was time to head back down the mountain before 32 degrees became 20 degrees and you spent a night shivering in the cold with the wind whipping in at 20 miles an hour, your wives wondering if they should start calling the forest rangers.

“Yeah, hi, I think my idiot husband and his idiot friend are dead in the woods…Well, good point, sir. It is possible these morons are just at the bar…Thank you. Oh, by the way, what’s the law on beating your husband for  not calling in? … Uh huh…I see…I was afraid you’d say ‘incarceration.'”

(Not a stretch of the imagination, mind you. Us being at the bar and forgetting to call in, that is.)

But no need for marital hostilities as we returned on time, alive and sober.

We only scratched the surface of what’s possible for rock climbing and bouldering on Sullivan Mountain. Guess we’ll have to go back again soon.