This is a new series for Appalachian Outdoor Journal, focusing on unique outdoors people, their adventures, their perspectives and what drives them. We hope you enjoy their stories and journeys. ~ Jim T. Ryan, AOJ

It would be an understatement to call Tim Lewis a runner. That’s a little like calling a lion a kitty cat.

The 29-year-old Salem, Va., resident is probably most well-known for his amazing sunset photos from McAfee Knob, the picturesque, iconic ledge along the Appalachian Trail. He regularly shares those photos with friends, acquaintances, and strangers on social media. It would also be an understatement to say Lewis has taken a lot of photos from the knob.

More specifically, as I write this, Lewis has summited McAfee (just a 10-minute ride from his home) hundreds of times in the past six years, making the knob and AT one of his primary training grounds for marathons, ironmans, ultra-marathons and multi-marathons. He’s made it a mission to run competitively in all 50 states, and has taken his feet to trails around the world. Currently, he’s run-bagged 21 states and three continents, including through the Andes Mountains in Peru.

In 2012, he and his father hiked Virginia’s Triple Crown (McAfee Knob, Tinker Cliffs, and Dragon’s Tooth) in 15 hours. That hike takes most people two or three days. Lewis said he ran it once in 5 hours of moving time. He also completed the Seven Summits Challenge (Roanoke’s seven most popular hikes) in 9 hours of moving time.

AOJ: When did you decide to start doing long-distance trail running and why? What got you into these type of ultra-running sports?

Tim Lewis: My dad and I got into running together in 2013. Blue Ridge Marathon being our first race of any distance. At the end of 2014 though, after completing a few marathons and an Ironman, we decided to do the Route 66 ultra-marathon in Tulsa, OK. It’s described as the world’s shortest ultra. 26.5 miles instead of the traditional 26.2. It takes you to a tourist attraction called the Center of the Universe. It’s a little circle outside of the city where you stand in it. When you speak or yell, you can hear an echo, but no one outside the small circle can hear the echo. I revisited it after the race and it really works. No one knows how the phenomenon happens but a best guess is some sort of echo from the buildings in the city. In 2015 I knew I wanted to do the Pikes Peak Marathon in Colorado. The toughest marathon in the country and the second toughest marathon in the world. I trained well for that and ended up being the most fun race of my life.

I then had my sights set on a 40 mile ultra-marathon in Fairbanks, Alaska in 2016. A longer route coinciding with a marathon there, which I saw was ranked one of the toughest in the world. I ended up not doing that one since they cancelled it due to not enough interest. I could’ve done the marathon route but found out they don’t give out medals, only patches. I didn’t want to go all the way to Alaska and not get a medal. Instead I ended up doing a semi-local race, which is the Iron Mountain 50-miler. Unfortunately, I (did not finish) that year due to extensor tendonitis in my foot flaring up.  I didn’t let that discourage me as the next year, in 2017, I did the first ever Blue Ridge Double Marathon. Shortly before that though I had an older woman talk me into doing a 72 hour race with her in June. I ended up making the double marathon a training run and did that with her, tripling my longest run ever from 54 miles to 158. In 2018, I completed my first actual 100 mile race in 25 hours.

Then in August, I completed the toughest marathon in the world, the Inca Trail Marathon in Peru. Third place overall and first place for American. Then in October, I completed the toughest 100-miler on the east coast, Grindstone 100. It’s hard to explain what motivates me to do these extreme races. I just feel incredibly alive, and that I’m living my life to the fullest when I do them.

AOJ: You’ve taken some amazing photos in your runs up to McAfee Knob. How many total summits have you made of McAfee? Why do you run up to the top of this mountain so often, and what goes through your mind when you get to the top?

TL: This past Saturday was my 189th summit to McAfee’s Knob. Ended up getting 67 summits in 2018.  I’m fortunate enough that this is the closest trail head to my house. Just 10 minutes away. I used this as my main training ground for the Pikes Peak Marathon in 2015. Sunset runs fit my schedule so well so I fell in love with the wide collection of photos I was capturing here, and everyone else seemed to love them as well. After using this as my training ground for the 50 miler in 2016 is when I decided to go back and count all the times I’ve ever been up here and start tracking overall summits. It makes training more fun. It’s exhilarating doing the same run over and over, but especially once I get to the top it’s truly a unique experience every time. It’s always hard to come down from there. The view is so spectacular. I’ve experienced this place in almost every weather scenario you can think of. From 1 degree and -24 windchill to mid-90s, the solar eclipse, and more.

AOJ: You listed some interesting stats for 2018: more than 1,800 miles run this year. What was your favorite long-distance run of the year and why?

TL: The Inca Trail Marathon in Peru by far. Labeled as the toughest marathon in the world, it was more fun and exhilarating than it was tough. Mainly because I trained so well I suppose. The scenery can’t be beat. Along with the cute llamas roaming along the course. It was hard to breathe or even make forward progress past Dead Woman’s Pass at 13,800 feet above sea level. Temperatures ranged from freezing to 80 degrees. The absolute toughest of this year, or maybe ever, was Grindstone 100 here in Virginia. 23,000 feet of elevation gain. It’s a close tie of how much pain was experienced here and the 72 hour race I did last year. It felt like it was never going to end. 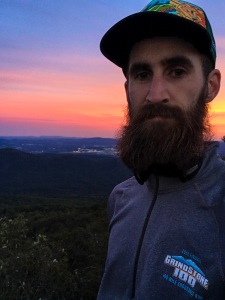 AOJ: Do you have a superstition or routine you go through in preparation for a trail run or marathon? What is it and why?

TL: Not really, just the traditional carb-loading and such. I’m more about experiencing as many things as I can at each new destination than I am about performance at the race itself. I’m using this as a way to explore the world.

TL: I don’t really have a New Year’s resolution, just more goals for 2019. A few other guys and I are looking to be the first to ever go for the first unofficial Blue Ridge Quadruple Marathon. I’m going to knock off some more states, the Sydney marathon in Australia, and Eastern States 100. I do remember I had a new years resolution in 2013 to go the entire year without drinking soda. Which I stuck with entirely.