My son, Chipmunk, and I had never really taken a backpacking trip alone, just the two of us. We did so in 2019 on the Tuscarora Trail, hiking to the top of Big Mountain, then back to our car in Cowans Gap State Park the next day via other trails.

The trip would be notable for two reasons: first, I absent-mindedly nearly stepped on a timber rattlesnake crossing the trail, and second, the photos we took on that trip were some of the most amazing scenes at the Big Mountain vista (2,458 feet).

We were hiking through a rocky section on the ridge’s plateau just before the clearing at the Geyer Trail that goes back down the west side of the mountain. I was talking to my son, and kept looking over my shoulder so that he could hear my voice.

When I looked back to the trail, a timber rattler was recoiled and my left foot was about to step down just in front of him! Had I stepped down, he likely would’ve struck me. Instead, I yelled “WAAAAAAAAH!!!” and hopped back about a yard, my eyes spinning in my head with the sudden adrenaline rush. “What is it?!” Chipmunk asked. I had him come a little closer so he could see the snake.

The snake didn’t strike. He also didn’t rattle. He settled down, and continued on his way across the trail, and into some brush and rocks. I cautiously snapped several photos of him and then moved on our way, too. He wanted nothing to do with us. I was just a clumsy man-beast not paying attention, like bumping into someone walking along a sidewalk.

Ripped and ready for an overnight backpack.

Chipmunk found a good size snail along the trail.

Taking a break along the trail so I could calm my nerves after the rattlesnake.

Ran across some bear tracks in the mud along the trail.

Chipmunk taking in the view from the top of Big Mountain just after arriving at our camp. 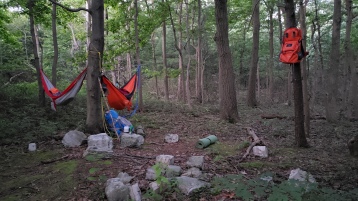 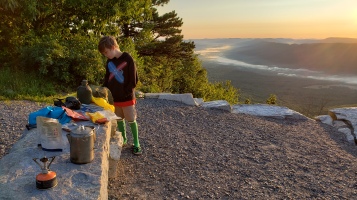 Best breakfast view in the world.

But needless to say, my nerves were shot after that. We took a break in the clearing, but even after resting in the warm June sun, it was hard to relax. Especially since the next 1.5 miles we had to hike through some of the tallest grass I’ve ever seen along a trail that follows an old logging road. I just kept thinking, there’s no seeing the snakes in this mess!

We didn’t see any other snakes on the trip. Just before the snake, we did see an eagle gliding through the forest tops. And we heard some distant owls cooing in the warm night, as well as some other critters.

But the night sky and the morning sunrise were worth so much more on this trip.

We set up camp just below the top of the mountain, slung our hammocks and enjoyed just hanging out and eating dinner. It was a makeshift camp, so we did not build a fire. Around 10:30 or so, we hiked back up to the top of the mountain to view the stars and the lights from the valley below. Chipmunk played the role of photographer’s assistant.

In the morning, we rose before sunrise, grabbed our breakfast and stove and jogged up to the top of the mountain again in time to see the sun peeking over the mountains. We stayed for a while, eating breakfast burritos, oatmeal and sipping coffee as the colors danced in the morning light.

With this trip, Chipmunk is no longer the littlest backpacker. He really had graduated from that title a couple years ago, but it somehow feels more official now that we’ve had our own father-son trip without his siblings.

My daughter is fast approaching trail age. And she doesn’t let me forget it. She’s the next Littlest Backpacker.